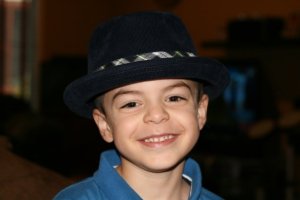 The Day I Almost Lost My Son and Wife
Personal blog by our CEO, Brent Mondoux

It was a frantic day and everyone was tired.  My beautiful wife had been in labour for three days with no eating and mere minutes of sleep.  She somehow managed to keep a smile on her face but she was exhausted.  While one of the nurses had good intentions, she forgot to check the hospital registration forms prior to administering a drip that included a pain killer that Nat was allergic to.

After three inductions, the fourth one finally succeeded and our beloved son, Aiden, was on his way, but nothing could prepare us for what was about to happen.   I’ve replayed his birth over and over in my head and every time it feels as if time has stopped, just like it did that very day.

Our beautiful little boy, Aiden, was born but he wasn’t moving.  I looked on in fear as the doctor looked up at us and spoke in a calm, controlled tone as if it was routine “You cannot hold your baby yet.  Don’t panic, you won’t hear him cry for a while.”

Within less than a minute, our room transformed from a calm delivery with a doctor and two nurses, into a frantic scene of a dozen medical professionals.  Dividing their attention between Nat and Aiden, they performed their duties as if they had been through this a thousand times.  Not a single voice rose, nor a single display of panic, working harmoniously they attempted to diffuse the emergencies at hand.

Overhearing their discussions, I finally began to understand the severity of the situation.  Aiden might not survive and Nat had post-labour complications and appeared to be hemorrhaging.  Was I about to lose my wife and my son?  Was the next five minutes of my life going to change everything forever?  Would my soul be able to weather the damage from such a catastrophe?

As I snapped back to reality two words overpowered my mind… “Not today”.  Still helplessly looking on I leaned over into a group hug with Nathalie and her sister Christina as we cried in each other’s arms.  Another minute passed which felt like an hour and silence was suddenly enveloped by the sound of Aiden’s cry.  “H-he’s okay?”, Nat muttered and I nodded as I said “I think so Princess”.

I left her side to talk to the medical team who informed me that his lungs were collapsed and that he would need to be admitted to the intensive care unit.  He was whisked away in a bubble as the team continued to work towards his stabilization while other professionals remained behind to ensure Nat’s immediate risks were taken care of.

Neither Nat nor I got to hold our son in our arms that night or for several days after.  Over the next few days Nat was released and we lived part-time in the intensive care unit visiting Aiden.  Within a few days we were permitted to hold our son in our arms.  Another week passed and the blur of emergencies cleared themselves up.  We were able to go home with our beautiful baby boy.

Today, Aiden is 8 years old, clever and witty, happy and curious.  Despite some minor developmental challenges, we work with him every evening and he always tries his best.  He has a bright future ahead of him thanks to that wonderful team of medical professionals who orchestrated the saving of his life at the Ottawa Hospital, General Campus.

I remember that day more than any other one that I’ve been alive.  I am so thankful that there are medical professionals who are so great at their job that they were able to perform a miracle with their very own hands and save both my gorgeous wife and beautiful son’s life on that day.  Aiden is alive because of them – March 17, 2004 a miracle happened.

Now, let me ask you this – if you sprain an ankle, break a tooth, your roof leaks, your car breaks down, you lose some money or even lose your house… compared to a situation of this severity, how can you sweat it?

Most problems that occur are “small stuff”, inconsequential and irrelevant in a matter of days, weeks or years – they are not permanent.  Most problems can be solved with a bit of work.  Stressing about it won’t help the situation, so what’s the use?

Next time that you find yourself stressed or worried, I want you to stop what you’re doing and adjust your reaction.  If it helps, come back and read this blog again.  Once you are able to realize what “small stuff” really is, it becomes difficult to let it get to you.

If my disclosure of this very personal time in my life helps only one person to sweat the small stuff less, then it was worth the time I took to write it.  Thank you for taking the time to let me share this experience with you.